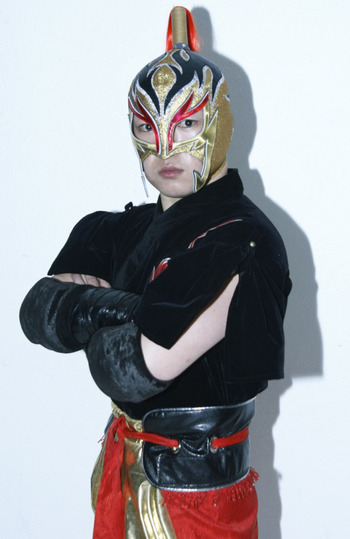 One of his many, many faces.
Takuya Sugi (born October 6, 1983) is a Japanese Professional Wrestler, better known by his ring names Yoshitsune, El Blazer and SUGI, among many others. He is known for his work in countless wrestling promotions both in Japan and Mexico, as well as the long list of gimmicks he has played during his career. He was trained at the Último Dragón Gym in México, wrestling for his Toryumon promotion and appearing in the short-lived Toryumon X brand along with his class. They later were moved to Michinoku Pro Wrestling, where Sugi had his home for years, eventually becoming the main star under the name of Yoshitsune until his departure in 2009. He also was a part of the reborn Toryumon movement, wrestling in Dragondoor and El Dorado Wrestling before briefly working for Dragon Gate all while under the character El Blazer, which became his trademark in the Japanese indy sleaze scene. He also had participations in main promotions like Fighting Opera HUSTLE, All Japan Pro Wrestling, Pro Wrestling NOAH and Pro Wrestling ZERO1, playing colorful gimmicks and one-night characters. In 2009, he moved to México again, becaming a young cruiserweight prospect for the Asistencia Asesoría y Administración company, until he was released due to a scandal involving fellow wrestler NOSAWA Rongai, and didn't surface back until 2017, ceasing in his freelance activities and joining ZERO1 full time until 2021.
Advertisement:

He is known as one of the best pure high-flying wrestlers in the world, being often compared to Jack Evans and PAC, and was for a time one of the most popular Japanese indy sensations, as you can note in the sheer number of tributes to him in YouTube.