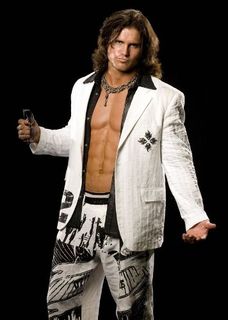 We, in fact, do have tropes in the Palace of Wisdom
"Hello, my name is John Morrison and if I had a nickel for everybody at WrestleMania better looking then me...I'd have no nickels."
"Hi, I'm John Morrison and I think so deep, I eat religion and crap out enlightenment."
Advertisement:

John Randall Hennigan (born October 3, 1979 in Los Angeles, California) is an American film major turned professional wrestler, better known by his ring name, John Morrison (though he has less frequently wrestled as Hennigan, Johnny Nitro and several variations thereof, being Johnny Mundo in Lucha Underground, Johnny Impact in Impact Wrestling, John Superstar in AAA and most recently Johnny Elite in All Elite Wrestling). After training in California's Supreme Pro Wrestling school, he tried out for WWE Tough Enough, being rejected for II but making the cast and winning III. So far he has had the most successful WWE career of any Tough Enough winner, ring wise.

"Now his trope list! This ain't no make believe"!