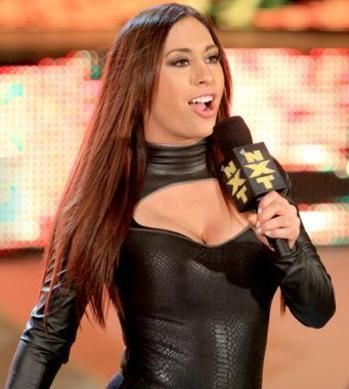 "My name is Maxine, and the only place for me is at the top."
— Her WWE Catchphrase
Advertisement:

Karlee Leilani Pérez (born April 19, 1986) is an American actress, model and professional wrestling personality. As a glance at her face would suggest, she has quite the collection of ethnicities in her blood - Spanish, Cuban, Hawaiian, Italian, English, Irish and Chinese to be specific. Before she entered wrestling, she studied to be a criminologist.

She signed a developmental contract with WWE in 2009 and first debuted in their developmental program FCW - first billed as Candy Girl, later being billed as Liviana. After a few months there, she appeared as one of the rookies for the third (all-women's) season of NXT where she was mentored by Alicia Fox, using the name Maxine. She was the second contestant eliminated, but continued dominating storylines in FCW - where she was even General Manager for a while. She enjoyed her biggest WWE success when she debuted as a character on NXT Redemption - first as the valet for Derrick Bateman, but soon breaking out on her own. After NXT Redemption was cancelled and retooled into the developmental show it is now, Maxine requested her release from WWE.

After a hiatus from wrestling for about a year, she has made a return to the squared circle - competing in TNA under her own name. She is currently part of Lucha Underground as Catrinanote Because of the nature of Lucha Underground, this is not simply a different working name, but a wholly different character she is portraying- namely an ancient Femme Fatale ghost controlling a thrice-reborn Wrestling Monster.

Tropes at the top: