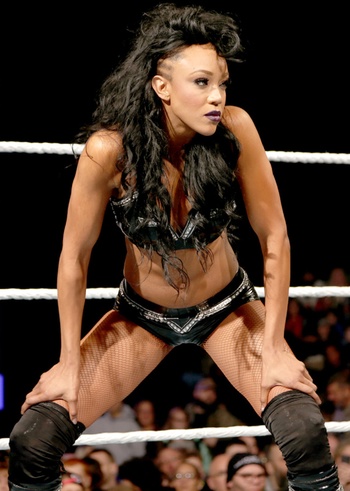 Shake Yo' Tail
Victoria Elizabeth Crawford (born June 30, 1986), better known as Alicia Fox, is an American Professional wrestler currently employed by WWE. She was originally a model, signed in 2006 at the same time as fellow Diva Kelly Kelly, after John Laurinaitis found them both in a swimsuit catalog. She was notably one of the first models signed by WWE to be exclusively trained in developmental territories before appearing on television. She first debuted in 2008 as Vickie Guerrero's wedding planner before becoming an official part of the roster at the end of the year.
Advertisement:

On October 17, 2019, her WWE.com profile was moved to the alumni section after months of inactivity. Neither WWE nor Fox herself have officially confirmed her status with the promotion, but it's very likely that she was released.