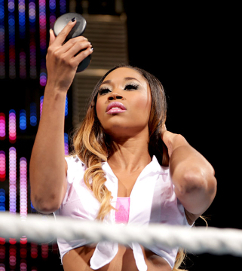 Girl, bye!
Ariane Nicole Andrew (born November 3, 1987) is an American professional wrester formerly signed with WWE under the ring name Cameron. After winning a non-televised 2011 Diva Search, she briefly competed on the 2011 season of WWE Tough Enough before becoming the first competitor to be eliminated. However, she was signed to the WWE anyway and debuted in its then-developmental center, FCW, under the ring name Cameron Lynn. Just one year later, she joined Naomi as a valet for Brodus Clay and they quickly formed the all-female tag team of The Funkadactyls, rising to success within the Divas division independent of Brodus. In 2014, Cameron and Naomi feuded with each other. Ariane has also been featured as one of the main cast members of Total Divas.
Advertisement:

WWE announced her release from the company on May 6, 2016.

She made an appearance in All Elite Wrestling on July 29, 2020 edition of Dynamite, where she teamed with Nyla Rose for their Women's Tag Team Cup Tournament.