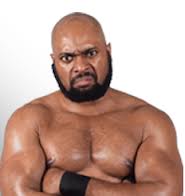 "Listen up, all you beer-belly sharecroppers, and you spineless cockroaches!"
Advertisement:

Allen James Coage (October 22, 1943 – March 6, 2007) was an American Judoka and Professional Wrestler from New York City, best known for his work from late-70's to late-90's as Bad News Allen / Bad News Brown. A twice Pan-American Gold medalist in Judo (1967 and 1975), he scored Bronze for U.S.A. at the Montreal '76 Olympic Games. Debuted in New Japan Pro-Wrestling in 1977 and made it his home for years, with the exception of an undercard run in WWE in 1980 and some appearances in the National Wrestling Alliance territory in Los Angeles. He also competed in the Calgary, Hawaii, Bahamas and Florida territories before he returned to WWE in 1988. He left in 1990 to go back to Japan with some side trips to independent promotions in Canada, the GWF in Dallas, the UWA in Mexico, and, it would seem, anywhere except the continental U.S.

Among his in-ring achievements, he was a 4x Stampede North American Heavyweight Champion

He retired from active competition in 1998 and tried his hand as commentator for a while in Canada, then he went back to the States where he became instructor on wrestling and judo. He was diagnosed with cancer in 2005, and died of a heart attack on March 6, 2007.

"...so go tell your grandmother, your three legged dog and that ugly gold fish you got, these tropes are Bad News!":