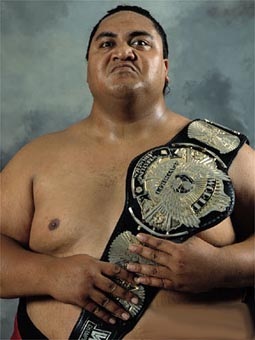 Rodney Agatupu Anoaʻi (October 2, 1966 – October 23, 2000) was a Samoan-American Professional Wrestler best known for his time in WWE from 1992-1996 as Yokozuna. His gimmick was of a former champion Sumo wrestler (the rank of yokozuna being the highest in sumo). He was a 2x WWE Champion

with Owen Hart. He started his career in the 1980s, first making an impression as Kokina Maximus in the American Wrestling Association, where he broke Greg Gagne's leg and ended his career. He also wrestled in the Continental territory in Alabama and in the UWA promotion in Mexico, where he co-held the UWA World Trios Title

with Fatu (Rikishi) and The Samoan Savage (Sam "The Tonga Kid"/"Islander Tama" Fatu.) He made his WWE TV debut in October 1992 and left after Survivor Series in November 1996. He was a member of the famous Wild Samoan Wrestling Family. He was inducted into the WWE Hall of Fame in 2012.