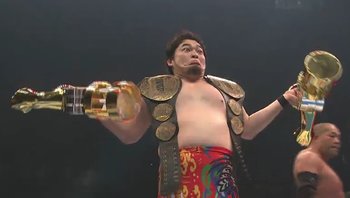 YANO! TO! RU! ¯\_(ツ)_/¯
In NJPW, there are plenty of hot-blooded, well-chiseled, brave-as-all-get-out athletes, from the Purest Ace, to the cockiest rich dude, to the most disrespectful slacker...all have that same fire and determination to win their matches.
Advertisement:

Toru Yano...is not one of those pro-wrestlers. And yet, he has wins over so many fantastic talents like them, nobody should ever underestimate him, for who knows what he's gonna do next? And what depths he'll go to do it?

Toru Yano (矢野 通 Yano Tōru, born May 18, 1978), is a Japanese professional wrestler signed to New-Japan Pro Wrestling, as one of their most unique...and humorous, talents. Finishing his successful career as a Greco-Roman wrestler for Nihon University, he joined up with NJPW's Toukan Club and debuted for the promotion in 2002. The Toru Yano everyone knows on the other hand, came into being in 2004, when he dyed his hair blonde, and began a long streak of disqualification losses...and hilarious antics. In 2005, he helped create the stable Great Bash Heel (G.B.H.), and has largely been affiliated with wrestlers in it and its subsequent stable CHAOS as its Plucky Comic Relief. He has won the IWGP Tag Team titles with three different partners, the GHC Tag Team Championship with Naomichi Marufuji briefly, and the NEVER Openweight 3-man Belts with the Briscoe Brothers.

Yano is primarily a comedy wrestler who rarely, if ever, fights fair, pulling every dirty trick in the book and then some to beat his opponents, usually making a fool of himself and/or the other wrestler in the process. However, because of, or perhaps in spite of, his silly nature, Yano has the reputation of a "Spoiler" in NJPW's tournaments: Frequently eliminating fan favorites and characters that are portrayed as way, way better than him at wrestling losing in upsets...usually stealing something of theirs while he books it to the exit ramp.