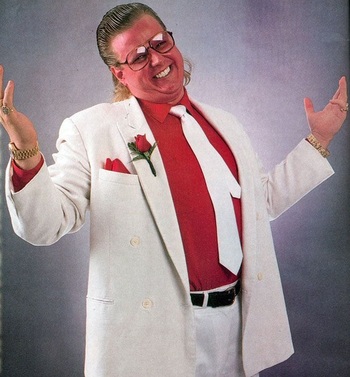 Bruce Prichard (born March 7, 1963) is a Professional Wrestling booker, manager, and producer. He is best known for his time as a manager for WWF, where he performed under the name of Brother Love, a managing televangelist (albeit one who claimed to preach the "word of love" rather than the "word of God"), who had his own segment, The Brother Love Show, where he would usually support the Heel wrestlers, and served as the original manager of The Undertaker. After leaving WWE in 2008, Prichard served as the Senior Vice President of Programming and Talent Relations for Total Nonstop Action Wrestling (TNA, now Impact Wrestling), appearing as a judge during their Gut Check segments, and as an onscreen authority role during the time in 2017 where the company went through several renames.

Since 2016, Prichard has co-hosted the Something to Wrestle with Bruce Prichard podcast with Conrad Thompson. In 2019 he rejoined the WWE as a member of their creative team, and in October was made the executive producer of SmackDown.