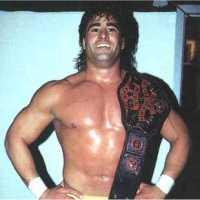 Tom Zenk (November 30, 1958-December 9, 2017) was an American Professional Wrestler and Bodybuilder. Discovered by Road Warrior Animal, then trained by Eddie Sharkey and Brad Rheingans, Zenk debuted in 1984 in the American Wrestling Association. Tom also worked for WCW and WWE. He died of atherosclerosis and cardiomegaly at the age of 59.

He was a 1x NWA PNW Tag Team Champion