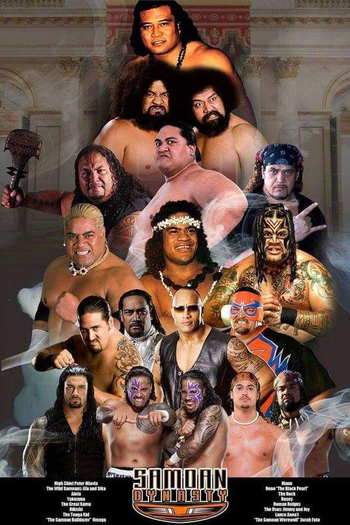 CHEEEEAAAAAA-HOOOOOOOO!
The Samoan Dynasty (also called the Anoa'i family, the Anoa'i clan, the Anoa'i Dynasty, the Uso Family, and The Bloodline) is an extended family of professional wrestlers whose roots primarily hail from American Samoa. While prominently known through their most famous members' exposure in WWE, many members of the family have wrestled in other promotions as well before touching grounds in Vince McMahon's universe.
Advertisement:

It all started when the Reverend Amituana'i Anoa'i became "blood brothers" with Peter Maivia, a High Chief of the Mālietoa lineage (one of Samoa's four great state dynasties) and one of the men who in a roundabout way trained two of the Reverend's sons to be professional wrestlers. Maivia had become a main event mainstay of the NWA New Zealand territory almost overnight and remained a steadfast and highly respected name in the business, while Amituana'i's sons, Afanote shorthand for "Arthur", as in Arthur Anoa'i and Sikanote full name Leati Sika Anoa'i Amituana'i, would become a highly acclaimed and successful tag team known most commonly as The Wild Samoans. (Yes, the original Wild Samoans—as in, the ones who made that whole "uncultured and dangerous savage islanders" character archetype famous in pro wrestling as well as gave it its name.) Their history in pro wrestling, however, would become well-defined not just by their own success, but that of their progeny.

Peter Maivia's wife Ofelia became one of the first notable female pro wrestling promoters, while Ata, Lia's daughter from her first marriage who Peter adopted as his own, would enter a relationship and later marriage with Rocky Johnson, an occasional tag team partner of the High Chief. Speaking of Reverend Anoa'i, another of his "blood brothers" had a daughter named Sharon who became Jimmy "Superfly" Snuka's second wife, bringing the Fijian high flying pioneer and all four of their children into the family tree as well. The Reverend's children (Afa and Sika, at least two other brothers, and especially their sister Vera) would all go to have children within their individual marriages who became pro wrestlers as well, sometimes after trying out other athletic careers such as American football. This example was similar to Rocky and Ata's own son Dwayne. Rodney, a nephew of both Wild Samoans, became successful in the early 1990s under The Gimmick of Japanese sumo-wrestling transplant Yokozuna, while Vera's sons with Solofa Fatu (particularly Solofa Jr., Eki, and Sam), Afa's son Samu, and Sika's son Matt, all went through various gimmicks and team-ups over the years, mostly centered around military, street life, or Wild Samoan motifs. In fact, Sam was brought into the WWF specifically to team with Snuka as his cousin The Tonga Kid, acknowledging Superfly's ties to the family.

Eventually Dwayne Johnson and Fatu Jr. became mainstays of the WWF during the mid-to-late '90s period which the company would coin as the "Attitude Era". Dwayne became known as The Rock, the most transcendent superstar to ever come out of pro wrestling, while Junior Fatu earned his greatest fame when he combined hip hop and sumo under the moniker of Rikishi. The Rock and Rikishi's family connections were brought up during a brief feud in 2000-2001 centered around the Mystery Fiction Excuse Plot for "Stone Cold" Steve Austin's absence through much of the preceding year, spawning Rikishi's infamous "I did it for The Rock" confession promo. Eki was the last to play the Wild Samoan gimmick straight on global television through his run as Umaga in the mid-to-late 2000s, though his life would tragically come to an end soon afterward.

It was in the generation that came of age in The New '10s that the family's seeds would sprout to the point of being marketable as a dynasty. That generation's wrestling bonafides included Afa's son Afa Jr. (briefly known as Manu in WWE) and Lloyd AKA "LA Smooth", who would come to team up as The Sons of Samoa; Fatu Jr.'s twin sons Jonathan and Joshua, who would become the elite Tag Team Twins known as Jimmy and Jey Uso, as well as Jonathan's wife Trinity (AKA dancer-turned-wrestler Naomi) and Junior's youngest son Joseph AKA Sefa (currently wrestling in NXT as Solo Sikoa); Samu's son Lance Anoa'i and Tonga Kid's son Jacob Fatu, two of the most prominent free agents in the latter parts of the decade; Superfly and Sharon's children Jimmy Jr. and Sarona, better known by their WWE names Deuce and Tamina; Afa's nephew Sean Maluta; Peter's niece Savelina, the infamous Nia Jax; The Rock's daughter Simone; and especially Sika's son Leati Joseph Anoa'i, who became Roman Reigns, successor to John Cena as the ultra-polarizing top man in the industry. The family on the independent circuit has explicitly taken the brand of The Samoan Dynasty under the guidance of Rikishi, while in WWE their lineage has earned the moniker of The Bloodline, especially when centered around the tandem of Roman Reigns and The Usos.

They also share friendly ties with Tongan wrestler Tonga Fifita AKA Haku, a former tag partner of both Samu and Junior Fatu. Haku's sons and distant nephew are all wrestlers as well, running together as part of the Bullet Club in New Japan Pro-Wrestling.

"Make no mistake about these tropes!:"