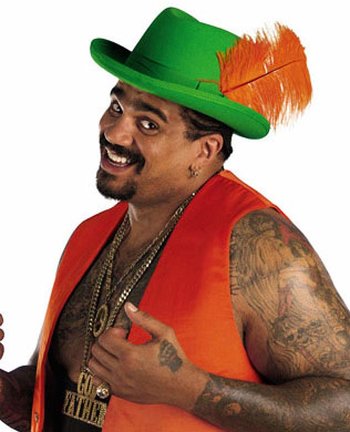 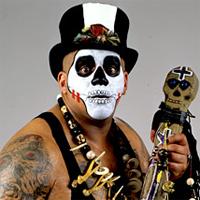 Charles Wright (born May 16, 1961) is an American semi-retired Professional Wrestler best known for his runs in the WWE as Papa Shango, Kama Mustafa and The Godfather (no relation to film of the same name).

Wright was working as a bartender, when during the filming of Over the Top, some wrestlers who appeared in the film noted about his size and suggested he should go into wrestling. After receiving training with Larry Sharpe at the Monster Factory, Wright found a job via Jerry Lawler at the United States Wrestling Association as The Soultaker, where he enjoyed a brief reign with the USWA Unified World Heavyweight Championship. The success he had there led him to tour with New Japan Pro-Wrestling in 1990. In 1991, via a suggestion from his friend The Undertaker, Wright signed on to the WWF, where he competed in house shows as Sir Charles, which was a play on his first name and the basketball player Charles Barkley (who was nicknamed "Sir Charles"). But in 1992, he would get his first national exposure as the voodoo practitioner Papa Shango. He would carry a smoke-bellowing skull and a lantern to the ring and control the lights as well as using his magic to cause his foes to suffer ill-effects like inexplicably bleeding and vomiting. He received his first big exposure in the main even against Hulk Hogan and Sid Justice at WrestleMania VIII, where he was to run in after Hogan finishes Sid with his leg drop and attack the former, resulting in a DQ. But Shango missed his cue and ran in late, where Sid had to kick out of the finish and his manager, Harvey Wippleman, interfered and ended on a DQ. Both Sid and Shango attacked Hogan when Ultimate Warrior made the save. After the match and Sid left the WWF due to failing a drug test, Shango was set to feud with Warrior, with him using his magic to torture Warrior, but the feud would be set aside in favor of Warrior battling Randy Savage at SummerSlam 1992. However, he was slated to wrestler the Warrior that November, but that fell through when Warrior was released from the company. Shango would linger around the mid-card before leaving in 1993 to a return at the USWA and a brief stint at Catch Wrestling Association.

In 1995, Wright would return to the WWF as Kama, a shoot fighter inspired by UFC fighter Kimo Leopoldo and would join Ted DiBiase's Million Dollar Corporation against their feud with The Undertaker, where he stole Undertaker's urn and have it melted down into a necklace. After losing it to Taker via their SummerSlam match, Kama would be taken off TV an aside from an appearance at Royal Rumble 1996, Wright left the company once again. He would return in 1997, as Kama, this time under his full name, Kama Mustafa, and would join the all-black Nation of Domination as they feuded with the all-white Disciples of Apocalypse and the Latino-Los Boricuas. After the Nation of Domination folded in fall 1998, Wright would take on the gimmick that would bring him his biggest success: The Godfather, a wrestling pimp with a barrage of girls with him that he refers to as "hoes" and would offer his opponents the services of one of his hoes if they would forfeit the match to him. The gimmick got him over with WWF audiences, even gaining him a run with the Intercontinental Title and an upset-win over WWF Champion Triple H, on Smackdown thanks to interference from Shane McMahon and The Big Show. But his popularity would wane when the Parents Television Council made the WWF crack down on lewd material, which included limiting what The Godfather could do. Meanwhile, he would end up in tag-team competition, teaming up with Val Venis, Mark Henry and D'Lo Brown. In response, WWF created Right to Censor to mock the PTC, a conservative stable that tried to censor the programming. Godfather even battled the Right to Censor member Bull Buchanan where he would agree to give up pimping if he lost. Godfather was defeated and renounced his former lifestyle and became the Goodfather, and began wearing a suit and tie, just like the other Right to Censor members. He would even get tag-team gold teaming with Buchanan, before the stable folded due to the Invasion angle of 2001. The Godfather would return in 2002, but wouldn't reclaim his past success before he was released from WWE in 2002 and temporarily retired from wrestling.

Since then, Wright has occasionally wrestled, even making sporadic appearance on WWE programming, even going into the WWE Hall of Fame in 2016.

"It's time, once again, for everybody to come aboard the TROOOOOOPE Train!":