Film / Over the Top 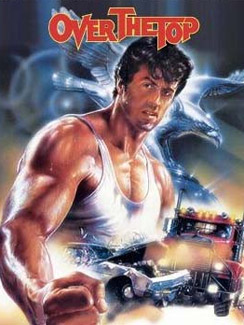 Some fight for money... some fight for glory... he's fighting for his son's love.
"The world meets nobody halfway."
Advertisement:

1987 drama and action film produced and directed by Menahem Golan of The Cannon Group and starring Sylvester Stallone as Lincoln Hawk, a truck driver who is also a famed arm wrestler. For unexplained reasons, he walked out on his wife and son years ago. His wife, who is in the hospital, asks Lincoln to pick up his son Michael from Military School to see her before her surgery. At first Michael and Lincoln are like oil and water. Lincoln makes an honest attempt to bond. Michael eventually softens, until he gets home to learn that the mom died from complications and his grandfather is fighting for custody, and hates Lincoln's guts. Lincoln decides to put all his money on the line in a Vegas arm wrestling showdown to start over again. At some point Michael realizes that Lincoln truly does love him.