Film / Over the Edge 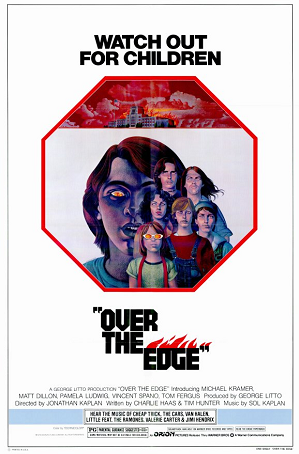 Over the Edge is a 1979 teen drama directed by Jonathan Kaplan (better known for producing and directing ER).

New Grenada, Colorado seems like the ideal community. Clean streets, nice houses, new schools. Unfortunately, the kids were left out of the plan, and have little to do in town besides drink and do drugs. Carl (Michael Eric Kramer), is a young man struggling between his desire to lead a normal life, and the delinquency of his friends.

But when Carl's father Fred (Andy Romano) starts cracking down on the delinquency in his town in a bid to attract a property developer, it drives Carl closer to delinquency, and drives the town closer to a breaking point.

Though it did poorly in the box office, it has become a cult classic. It's also notable for Matt Dillon's first role as Richie, Carl's delinquent friend.

Not to be confused with the similarly named but much more light hearted Animated Film Over the Hedge.