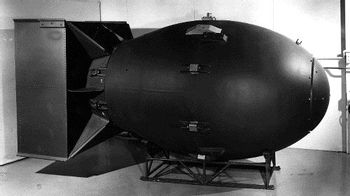 The original earth-shattering secret weapon.
Avon: We do not know what IMIPAK is.
Blake: Exactly. The least we've got to do is find out what it does.
Vila: Why have we? I can live without it.
Blake: It's just conceivable that you can't.
Avon: Unless of course you want your last words to be, "So that's IMIPAK!"
— Blake's 7, "Weapon"
Advertisement:

Because life just isn't as fun when you can see everything coming, there are several instances in fiction where the writers have chosen, for one reason or another, to give The Hero or the Big Bad an incredibly powerful, life-altering, plot-resolving super weapon (or super power), but not reveal what it is to the audience. They may only casually allude to it as "my secret weapon", they may pretend to "show" it but have it largely obscured by shadows or other objects in the way, or they may not even mention it at all until the pivotal moment. Regardless, this trope serves to create dramatic tension and keep the audience glued to their seats until The Reveal.

Something of a Discredited Trope, simply because it was overused to the point of nausea in the past, so it is more often Parodied or Played for Laughs in modern fiction. Also, while secret weapons used to be almost exclusive to super villains, more and more works are giving heroes a chance to invoke this trope as well.

This can occasionally overlap with Chekhov's Gun. For example, if it turns out that ballpoint pen the Big Bad is constantly twirling in his fingers is actually a world-ending nuclear device, both tropes would apply. If constructed poorly, this trope can also lead to Deus ex Machina.

See also It May Help You on Your Quest, for obscure items that come into play later, Forbidden Chekhov's Gun, where the characters must do something that they have been explicitly forbidden from doing, and Forgotten Superweapon, where the characters have a super powerful weapon, they just forgot about it. Stupid Jetpack Hitler and Soviet Superscience can often overlap with this trope, given that many of the things that both the Nazis and Soviets have invested and researched heavily into was the development of revolutionary weapons technology, of which many were kept top secret until much later on.