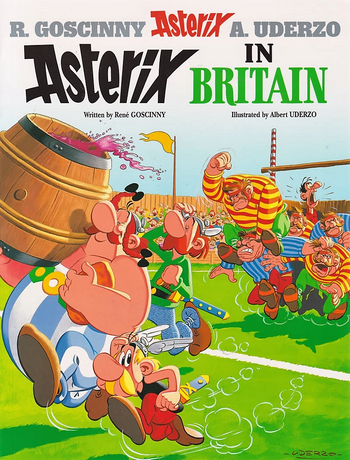 In the eighth Asterix volume, Goscinny and Uderzo turn their satirical eyes to their neighbours across the Channel. note Said neighbours' fondness for self-deprecatory humour has made this the most popular Asterix volume there.
Advertisement:

After conquering Gaul, Julius Caesar set his sights on Britain. The Britons, who are similar to the Gauls (they are also Celts and are descended from Gaulish tribes who crossed the water centuries earlier and who speak the same language as their Gaulish cousins, but with some peculiar idioms of their own, eh, what), frustrated the Romans with their tendency to stop a battle to drink cups of hot water and their refusal to fight on weekends; Caesar decided to only attack during hot water breaks and weekends, and the Britons under their chief Cassivellaunos were defeated. Now, only one village in Cantium (known as Kent today) is still fighting the Roman Empire, aided by such visiting chieftains as O'Veroptimistix the Hibernian (Irishman) and McAnix the Caledonian (Scotsman). The chief of said village, Mykingdomforanos, knows they can't hold out against the Romans forever without help. Warrior Anticlimax mentions that the village of his Gaulish cousin-once-removed Asterix has a magic potion that grants super-strength, and volunteers to retrieve it.

Asterix and Obelix are more than happy to help Anticlimax bring a barrel of magic potion to Britain, and offer to come along (in a reference to contemporary British animal quarantine laws, Dogmatix must stay behind). Before leaving, Asterix notices some herbs at Getafix' house, and the druid tells him he's welcome to take some along - they might come in handy in Britain. En route to Britain, the three warriors come across a Roman galley on its way back to the continent, some of the passengers on which, including centurion Tullius Stratocumulus, were previously posted to the fortified camp of Aquarium near the Gauls' village. Anticlimax gets his first experience of the magic potion's effects as the trio board the galley and thump everyone aboard, but Obelix lets slip that they are carrying a barrel of magic potion, and once the trio have returned to their boat and moved on, Stratocumulus orders the captain to return to Britain to warn the local Roman legions of the Gauls' plan.

Problems set in quickly for our heroes once they land in Britain; aside from weather that alternates between rain and fog, food that revolves around boiling everything until it has no flavour left and serving it with bitter mint sauce, and beer served at a far warmer temperature than the Gauls can stomach, they have the Romans trying to chase down the barrel of magic potion, and soon they are caught between two patrols on the road to Londinium (called London today), forcing them to cut across country and wait until fog sets in before entering the city. Once there, Asterix, Obelix, and Anticlimax try hiding in the Jug and Amphora, a pub run by Anticlimax' friend Dipsomaniax, with the barrel of magic potion disguised as one of his barrels of wine, but the Romans have orders to raid every inn in the city and confiscate every barrel there, and Dipsomaniax is powerless to stop them.

The local legionaries are instructed to sample every barrel they have confiscated until they find the magic potion - which inevitably leads to the entire garrison becoming fall down drunk. When one legionary does stumble on the barrel and is surprised to suddenly gain superhuman strength, he is too soused to report to his superiors, and when Asterix and Obelix arrive, Obelix knocks out the now belligerent drunk before he can tell them which barrel he sampled. Obelix tries the "sample every barrel" method, with predictable results, and Asterix is forced to load all of the barrels from Dipsomaniax' inn and the plastered Obelix onto an ox-cart borrowed from the publican. As they pass a Roman patrol, Liquid Courage sets in and Obelix gives his and his friends' identities away by jumping down to bash them in; Asterix and Anticlimax have no choice but to join in, and while their backs are turned, a thief steals the cart. Obelix passes out, and Asterix and Anticlimax leave him at Dipsomaniax' pub to sober up while they look for the cart.

But as the only barrels stolen back from the Romans belong to Dipsomaniax, the local garrison know exactly where to continue their own search, and after a few hours' unsuccessful searching for the stolen cart, Asterix and Anticlimax return to find Dipsomaniax' pub burned to the ground, and one of his neighbours tells the duo that the publican and "a fat man asleep under a pile of helmets" were taken prisoner. Specifically, they were taken to the Tower of Londinium; by now, Obelix has sobered up (though he is suffering from Hangover Sensitivity) and easily breaks himself and Dipsomaniax out of first their cell, then the tower itself... just as Asterix and Anticlimax break into the tower to rescue them. A few misunderstandings later, the four are finally re-united.

Dipsomaniax takes our heroes to a pub run by his friend Surtax, who reveals that a strange man sold him a barrel of wine with Dipsomaniax' name on the side; he had the man followed and gives Anticlimax and the Gauls his address. Now that they know where to look for the thief, they drop by his house and shake him down until he gives them a list of the names and addresses of every pub to which he sold one of the stolen barrels. The trio promptly tour the pubs on the list, though they only sniff the wine rather than tasting it; unfortunately, this attracts the attention of a Roman patrol led by a decurion with more intelligence than is usually seen in the Asterix series, and he tails them in the hopes of being led to the magic potion. The publican of the Dog and Dux, the last pub on the list, reveals that he did buy one of Dipsomaniax' barrels, but he sold it to the rugby team from Camulodunum (now Colchester), who are playing a big match the next day against Durovernum (now Canterbury).

The Gauls and Anticlimax go to the rugby match the next day (as do the surprisingly intelligent decurion and his men, disguised in civilian clothes), and discover that the Camulodunum team now has the barrel of magic potion when a player named Hipiphurrax is given a sample and single-handedly runs roughshod over the Durovernum team. Our heroes rush the pitch and steal back the barrel (Obelix proves to be quite adept at rugby in the process, foreshadowing the game's future popularity in France), while the Roman decurion and his troops try to follow them but get caught up in the rugby match. However, when the Gauls and Anticlimax try to escape on the Tamesis river (called the Thames nowadays), the Romans are waiting for them, and one boulder from a catapult later, the barrel has been splintered into fragments and the contents lost in the river.

Nonetheless, they continue on to Anticlimax' village. There, Asterix gets the idea to brew a potion from the herbs Getafix gave him - he doesn't know if they'll be magical, but it might encourage the village's warriors. Sure enough, the placebo effect works, the Romans are routed, and Mykingdomforanos decides to make the concoction the national drink. He invites the Gauls to join in a celebratory banquet, but Obelix has had all he can stomach of boiled boar, and he and Asterix bid farewell to Anticlimax and return home (passing Redbeard and his pirate band again on the way back; the Gauls completely ignore them, though, and Redbeard is so relieved he accidentally runs the ship aground) to a reunion with Dogmatix and a celebration with boar cooked as it should be - roasted over an open fire. Meanwhile, Asterix asks Getafix about the herb. The druid reveals that they came from a plant that grows in barbarian lands. The name of the plant? Tea.

It received an Animated Adaptation into a film in 1986, and a live action film adaptation in 2012.

"These Britons are crazy!"