Literature / Look to the West 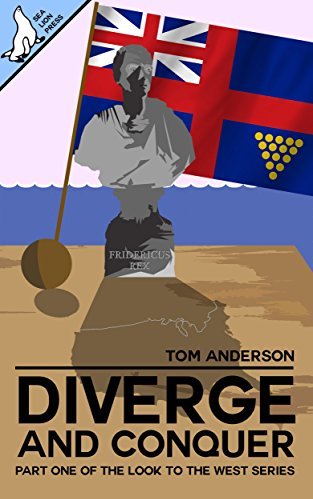 Cover of the first volume in the series
At the end of the day, 'revolution' means 'to go round in circles'.
Advertisement:

Look to the West, written by Thomas "Thande" Anderson, is one of the longest-running and acclaimed alternate timelines on AlternateHistory.com, a site dedicated, unsurprisingly, to Alternate History which also gave us Decades of Darkness.

The timeline is written as a series of clippings from sometimes biased or incomplete "local" histories written by the natives of the timeline, with multiple viewpoints mixed together for balance and the whole sprinkled with footnootes from the author (although technically from the team below), quotes real and fictional, and occasional helpful interludes in which a team of crosstime explorers from 20 Minutes into the Future (our future, it would seem) explain their findings.

It begins with George II of Great Britain tripping up on his coronation carpet, and from there things stay much as we know them for a couple of decades, then gradually diverge. The world is already noticeably different in 1795, when things start diverging dramatically and very, very bloodily. The timeline is currently in about 1930, but chapters are thematic, not chronological.

The timeline makes use of an idea known as "Alternate Timeline Brothers" in which people may be shaped by circumstances in different ways, be mergers of different siblings, have different names and lead different lives, but are fundamentally familiar. Such characters, and other dramatically different things having the same name, are indicated with an asterisk (*), short for "alternate". After a couple of generations, of course, these characters become considerably less common.

The prose timeline is augmented with a "raw" record of events, a helpful collection of wiki pages

The timeline is being published by Sea Lion Press, with four volumes so far: I: Diverge and Conquer

, III: Equal and Opposite Reactions

. Thus far, three additional volumes have been posted in rough draft form on Alternatehistory.com and the Sea Lion Press forums, to be published in time; the published versions include bonus maps, images and appendices such as a reference chronology.

Historical characters who appear or are referenced in the timeline: