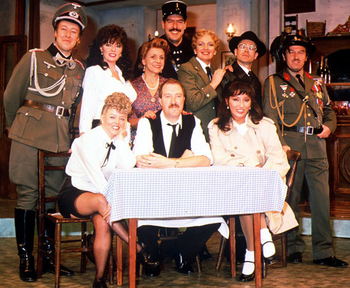 A 1980s BBC sitcom, set in Occupied France during World War II. Lasted from December 1982 to December 1992, a total of 85 episodes in nine seasons, which is extremely long-running for a BBC show.

Very much a parody of Secret Army, an earlier drama set in a similar milieu, it starred Gorden Kaye as René Artois, owner of a restaurant in a small occupied French town — and a whole host of other characters (for a longer list see here). For the most part, René, who would introduce each episode with a Fourth Wall-breaking monologue to the camera in which he'd helpfully recap the plot for us and gripe about it, just wants to keep his head down, stay out of trouble and fool around with the improbable number of beautiful women who are passionately attracted to him. Unfortunately for him, he keeps getting dragged into numerous intrigues and shenanigans involving the French Resistance and the occupying Germans, who both view him as essential to their various schemes.

The show was a huge hit at home and overseas. The BBC gave the producers a huge budget, allowing scripts to incorporate more zany stunts and explosions than one would expect of a story concerning the whereabouts of a painting and its forgeries.

A Licensed Game, 'Allo 'Allo Cartoon Fun, was released for the Commodore Amiga in 1993. It is a Platform Game where René has to collect various items hidden around the stages while avoiding the Germans.

This show has its own tropes:

Read this very carefully, I shall list these tropes only once:

Edith sings "Boom! Why Does My Heart Go Boom?", with the usual response to her singing.

Edith sings "Boom! Why Does My Heart Go Boom?", with the usual response to her singing.