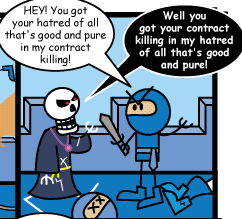 You know the saying "There's Always a Bigger Fish"? Well, it also applies to crime and criminals. When a story opens with a thief, kidnapper, or murderer "getting away with it" or proceeding with stage 3 of their 4 step plan, they may run into Colliding Criminal Conspiracies when they get entangled along with or caught in the traps of another, bigger or more professional criminal... or monster.

If they took some Innocent Bystanders for hostages, then both kidnapped and kidnappers are going to have to work together if they want to get out alive. Usually though, this threat is so grave they fast forward past Stockholm Syndrome and/or Lima Syndrome and develop true loyalty for each other that can last a lifetime. If they survive, that is.

This isn't to say all is forgiven and the criminals turn over a new leaf and make them truly sympathetic by pitting them against a truly worse adversary. Quite the contrary, they might show that they're really rotten by showing that after their need for Teeth-Clenched Teamwork has passed, they plan to kill their former kidnap victims, and/or by using the hostages as Human Shields and dying thanks to their stupidity. Good riddance to that Asshole Victim. Interestingly, both of the above can exist in the same story if one criminal repents and the other doesn't.

Likely candidates for conspiracies to collide into are: Arriving at the home of Mad Scientist, Cannibal Tribe, or some sort of monster. One especially deliciously ironic variant is to unwittingly kidnap a monster. Due to the high stakes, expect the protagonists (both kidnapped and kidnappers) to have to choose between leaving the loot and living, or getting the gold and potentially dying. Compare Unintentionally Notorious Crime, which might overlap.