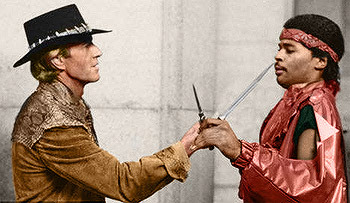 "That's not a knife...that's a knife!" RRRIIIPPP!!!
"They had the heavy, stolid look of those thugs whose appearance in any narrative means that it's time for the hero to be menaced a bit, although not too much, because it's also obvious that they're going to be horribly surprised."
— Mort
Advertisement:

So, Fingers McStealy is lurking in an alleyway waiting for a victim. Ah, here comes someone, and that fetching hat and coat look expensive. He's smiling too, so maybe he just came into money? Ooo, he even has something shiny under his coat. What Could Possibly Go Wrong?

Basically this is when some random crook, and occasionally a pretty stupid one at that, has the misfortune of targeting someone much more powerful than he assumed. When the Super Hero/monster/alien assassin/robot/ sorcerer from the future/other world/space appears, the criminal acts as a disposable victim they can demonstrate their powers on for the benefit of the audience. Alternatively, The Hero is held up while going about their business. If they have a Secret Identity, then it can lead to a Bruce Wayne Held Hostage scenario, but if the criminal attacked them in costume or the hero is just some badass Walking the Earth, then it typically just serves as an introduction. Bonus points if the would-be victim looks particularly vulnerable.

When an assailant targets a crowd of people not knowing that Everyone Is Armed, you get this trope with strength of numbers replacing individual dangerousness.

Tends to make a good Establishing Character Moment, depending on how (and how easily) the crooks are dealt with. It can be particularly useful for more heroic or sympathetic characters, as it enables them to demonstrate how effective they are in a fight without being the ones to start it. Occasionally this can lead to them recruiting a sidekick or other allies. Can be deeply satisfying. When the person looks vulnerable due to chronological endowment, it's likely a mighty old person.

When a Video Game character does this without the game acknowledging how hopelessly outmatched they are, it's often due to Suicidal Overconfidence. See also Dude, Where's My Respect? when this keeps happening with no signs of anyone figuring out the pattern. Compare Colliding Criminal Conspiracies and Unintentionally Notorious Crime. Supertrope of Robbing the Mob Bank.

Please note: the trope need not include actual mugging (though it is a popular method). As long as the provocateurs intentionally and excessively antagonize someone much more powerful than they are without knowing beforehand what they are screwing with, and get fixed accordingly, then it fits.

A trio of highwaymen try to rob the nobles of Whitestone. It doesn't work.

A trio of highwaymen try to rob the nobles of Whitestone. It doesn't work.