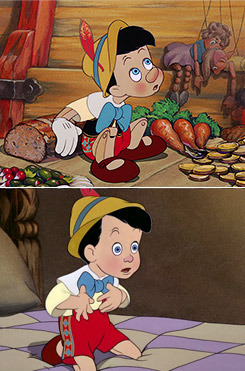 "Prove yourself brave, truthful, and unselfish, and someday, you will be a real boy."
"Well, I just think that the concept of chi might be a little hard for her to grasp. She's not the descendant of a long line of mystical warriors, she's the descendant of a toaster oven."
— Anya, Buffy the Vampire Slayer, "Bargaining, Part One"
Advertisement:

So, you've got your Artificial Human grown in the tank or just put together your Robot Girl with an assembly kit. Unfortunately, your creation is not a ridiculously human robot, and thus, predictably, they have all the emotional range of a tuning fork. Robo Speak is a common manifestation of such emotional paralysis.

Not to worry, though! While in reality, socialization and emotional stability are the product of years and years of interaction with other people, in the world of fiction, all a robot or Artificial Human needs to become a functioning, well-balanced, emotionally resonant member of society is the proper life-altering event.

Much as any protagonist generally works out any personal issues and neuroses they may have over the course of an otherwise unrelated story, any emotionally stunted individual, or creature conventionally incapable of emotion, will discover what it means to be human in their journey alongside the other heroes. That this may defy their programming, their lack of a soul, or other such assumed limits is beside the point — it appears robots and clones are socialized like real people, only much faster.

Often, such a journey involves extreme violence and the simplistic black-and-white morality of "them vs. us". The fact that this bears no resemblance whatsoever to daily life rarely comes up. (One can only imagine the difficulties such characters will encounter when they are placed within a situation where you can't solve any problem with the proper application of violence.)

One also has to wonder if any such individuals later regret their humanization. Humanity Ensues, of course.

This is a common anime plot, and also appears in several Western movies.

Compare Emergent Human (which describes a newly turned human getting used to the human condition), Defusing the Tyke-Bomb (which describes the gaining of a heart rather than a soul), and Pinocchio Syndrome (which solely describes the desire to become human). See also Just a Machine. Living Toys made from Love Imbues Life may seek this.

Contrast Mechanical Lifeforms, who start with the same emotional range as their organic counterparts. Contrast Trans Nature, for when the creature trying to become human wasn't an artificial human. For the inverse of this trope see Toy Transmutation.