Literature / East of the Sun and West of the Moon 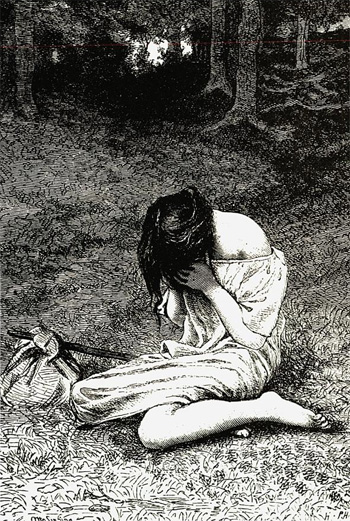 "She was lying on a small green patch in the midst of a dark, thick wood. By her side lay the self-same bundle of rags which she had brought with her from her own home. So when she had rubbed the sleep out of her eyes, and wept till she was weary, she set out on her way."
Advertisement:

"East of the Sun and West of the Moon" is a Norwegian fairy tale collected by Peter Christen Asbjørnsen and Jorgen Moe.

It involves a white bear that offers to take the youngest child to fix a family's poor situation. They accept and the bear takes the young girl to a castle where a man slept in the same room as her at night in the dark. As such, she could not see who it was. When she was homesick she was allowed to go home with one condition: She is not allowed to stay with her mother alone. Of course, the young girl doesn't listen and takes a magical candle from her mother. When she returned to the castle, she was able to see the face of the man that has been visiting her bed at night — who was actually the bear. After a what have you done moment he gets taken away by his troll stepmother to marry a troll princess. Before leaving, he tells her that he will be at a land East of the Sun and West of the Moon.

She sets off to find him and meets a woman and her daughter on the way. This woman gives her a golden apple and lets her borrow a horse. Next, she meets a woman who gives her a golden carding comb. A third woman gives her a golden spinning wheel and tells her that she should go find the east wind who might take her to the place that she seeks. The east wind could not help her as he never blew that far so he tells her to visit the west. After facing the same scenario, she visits the south and finally the north wind. The girl then gives up all of her golden items to the princess in exchange for a night with the prince. On the first two nights, she could not wake him. Eventually the servants tell the prince about the girl and he tosses away the drink — actually sleeping potion — from the princess that night. In the end, the girl defeats the trolls (the stepmother and the princess) by washing out the tallow of one of the prince's shirts, because the prince refuses to marry someone unable to do something so simple. The story ends with all the trolls exploding. Everyone else lives happily ever after.

It's Aarne-Thompson type 425A, the search for the lost husband, a type of which there are many variants

. Compare The Feather of Finist the Falcon and Pintosmalto, and for the Gender Flip Soria Moria Castle and The Blue Mountains.

The tale, with all related versions, is reckoned to be related to the tale of Cupid And Psyche, as re-told in the book The Golden Ass by the author Apuleius, from the Roman era. This version is probably the Ur-Example of the story. As everyone will understand, the girl has the role of Psyche, while the prince has the role of Cupid/Eros.

For a modern novel version, see East by Edith Pattou or Once Upon a Winter's Night by Dennis L. McKiernan. There is also Ice, by Sarah Beth Durst, which adds in some Inuit legends into the mix, and The Polar Bear King.

A number of famous illustrated versions of this fairy tale have been published, including by Mercer Mayer

, among others. All of the versions are slightly different. Do not confuse with the Haruki Murakami book South of the Border, West of the Sun.

You can read the tale online in translations by Andrew Lang

Tropes in East of the Sun and West of the Moon:

Alternative Title(s): East Of The Sun West Of The Moon