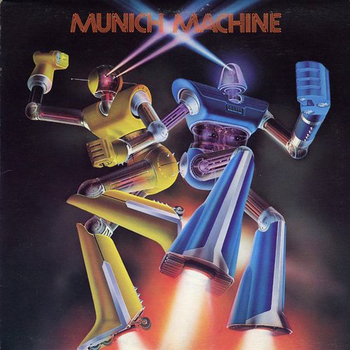 "Get on the Funk Train

This is where mecha, robots, or anything similar have lower legs and forearms bigger than the corresponding thighs and upper arms, as if they had giant bracers and boots on, or bell bottom pants from The '70s.

There's a few various reasons for this trope. One of the most common is the prevalence of robots with Rocket Boots or various arm mounted weaponry on their forearms. Another reason is the prevalence of Shoulders of Doom or hip-plates on many robots, whose great size leaves less room for the upper arms and thighs respectively, while the forearms and lower legs are free to look bulkier.

And from an artistic standpoint, it can either come across as a convenient or a lazy design choice if drawing hands and feet comes of as time-consuming without covering them.

Contrast Top-Heavy Guy whose overall body is disproportionate and Creepily Long Arms for arms that are unusually long, compare Chicken Walker for another popular form of Robotic Legs. See also Fingerless Hands, which is the organic version of this.