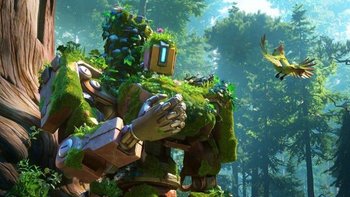 Even a machine can learn to love.
"She had been forced by the rules her maker had imposed on her to sacrifice herself for the human. It wasn't that she wouldn’t have anyways. She just would have liked the choice. Making sacrifices and doing good deeds wasn't actually good if you were forced to do them."
— Worm, regarding Dragon
Advertisement:

Artificial Intelligence isn't always a crapshoot; sometimes an AI comes into being and has no desire to harm or subjugate anyone, and just wants to live in peace, do its job, and/or help humanity.

Although instances of this trope are somewhat outnumbered by those where the AI is malevolent, it is becoming increasingly common in recent years as the world becomes progressively more comfortable with the idea of artificial intelligence due to the increasing use of technology in our lives.

A Three Laws-Compliant AI is intended as this. The Computer Is Your Friend tries to be this, but goes too far and becomes a Knight Templar.

Subtrope of Artificial Intelligence. Supertrope of Robot Buddy, which only covers A.I.s who are a) housed in a robot/independent body, and b) are the assistants of human characters. Compare Androids Are People, Too. Contrast A.I. Is a Crapshoot and Robot War.

In the short, "Modern Inventions", after finding himself in a machine that treats its user like a baby, Donald Duck decides to mess around with it, and gets more than he bargains for.

In the short, "Modern Inventions", after finding himself in a machine that treats its user like a baby, Donald Duck decides to mess around with it, and gets more than he bargains for.