Cars Without Tires Are Trains 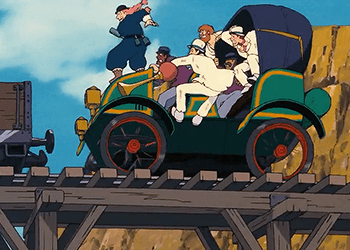 Basically, if you've seen train tracks so far in the film, and then the hero's tires get shredded, you can bet that the car is going on those tracks. There's no explanation for why any car's rims will fit standard-gauge train track as if it were built for the task, except that it's cool.

As well as the obvious gauge problems (most cars have slightly different axle widths, while trains need to be extremely precise), there is a more subtle issue with this to do with physics. While it takes less energy for metal wheels to run on metal rails than for rubber tyres to run on the ground, the lower friction means that there is more chance for slippage between the wheel and rail. Since road vehicles are often lighter than rail vehicles, accelerating without causing a wheel-spin and braking without skidding can require great caution.