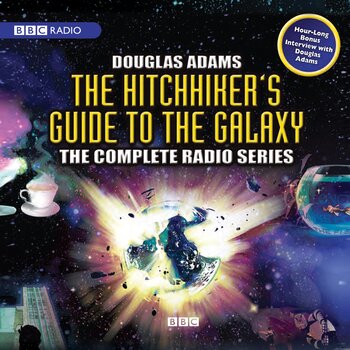 A Radio Drama on BBC Radio 4 which later became the basis for various spin-offs. It (technically) ran for twenty-six years and as many episodes.

It started with only two series (or "Phases") in 1978-1980. It was later mixed-and-matched into the first two novels. It was later revived in 2003 and spawned three more Phases based on the last three books by Douglas Adams. Another revival in 2018, the Hexagonal Phase, adapted Eoin Colfer's entry in the series, And Another Thing....

The cast was fairly consistent across the board, with only Peter Jones and Richard Vernon being replaced between the second and third series due to their deaths in the interim. Even death didn't stop Douglas Adams from putting in an appearance in the Tertiary and Quintessential Phases, despite the fact that he wasn't reprising a previous character.

The sixth season contains examples of: