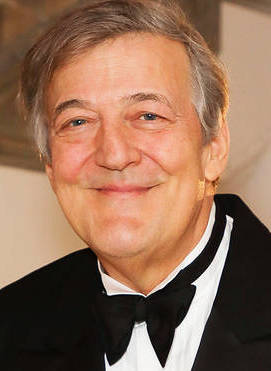 A man of intense intelligence and great coolness, Stephen John Fry (born 24 August 1957 in Hampstead, London) served as the host of QI for its first 13 series and starred in Kingdom (2007), about the life of a rural lawyer. He has also written and contributed to several books, namely The Liar, The Stars' Tennis Balls.

and Making History (a time travel story about erasing Hitler from existence), as well as three autobiographies Moab Is My Washpot

, The Fry Chronicles and More Fool Me, and The Book of General Ignorance. He is very much the modern day Oscar Wilde (though he's English, and played the man himself in a biopic) and is generally considered a British national treasure.

A Cambridge graduate and a personal friend of J. K. Rowling (he won a Talkie for his reading of the UK edition of the Harry Potter unabridged audio-books)note Jim Dale narrates the American versions, he has appeared as several Melchetts in Blackadder, played Jeeves in Jeeves and Wooster, portrayed Oscar Wilde in Wilde, and starred as Fry in A Bit of Fry and Laurie. Not only is his voice acting superb, the sheer breadth and convincingness of the accents he puts on for various characters is stunning. Excellent accents are a particular quality of his.

He is openly gay (or as he says, "90%") and open about having bipolar disorder. His early life resulted in him doing three months in prison for credit card fraud. On his release, he got a scholarship to Cambridge and joined the Cambridge Footlights, where he met Hugh Laurie through a mutual friend.

It is a sign of how well liked he is that when he vanished from a stage production he was a part of, literally missing his cue, and couldn't be found in the building, the British Tabloids published concerned articles asking him to come home, rather than the usual cruel mockery an actor would have got for such highly advanced stage fright. He only got a token mocking when he turned up in Belgium.

He also had a recurring role in Bones. He appeared in V for Vendetta (as Gordon Deitrich, a comedy television show host), as the title character in the satirical series This Is David Lander, as the Guide in the film version of The Hitchhiker's Guide to the Galaxy (mostly as a favor to the family of his late friend Douglas Adams) in which he also displayed his musical talents in the soundtrack with the bonus techno-rap song "Reasons to Be Miserable", is the narrator of the LittleBigPlanet video game series (reprising the role in PlayStation All-Stars Battle Royale), and voiced the narrator in Pocoyo, Hedonistic Sociopathic Hero Reaver in the Fable games, and played the main character of Absolute Power. He made his directorial debut in 2003 with the film Bright Young Things, for which he also wrote the screenplay, adapted from Evelyn Waugh's 1930 novel Vile Bodies.

, The Secret Life of the Manic-Depressive

which concern the result of the aforementioned disappearance to Belgium, eventual diagnosis of bipolar disorder and his difficulties dealing with being Jewish on his mother's side, having lost family in the Holocaust, and being a fan of Richard Wagner, a notorious anti-Semite who inspired Hitler. note all links to trailers He was scheduled to write an episode of Doctor Who, but the idea fell through due to time constraints on his part.

In addition, he has a lovely, comforting voice. He is also known for his distinctive crooked nose as a result of breaking it at the age of six, and refused to undergo corrective surgery because he sees it as his trademark.

He has featured on Top Gear (UK) as the "Star in a Reasonably Priced Car", having lost about seven stone before the episode, as he went on a diet, prompting Jeremy Clarkson to ask where the rest of him was.He played Mycroft Holmes (Sherlock's older, cleverer, but indolent brother) in Guy Ritchie's Sherlock Holmes sequel. This was something of a Promoted Fanboy moment for him, as he says in his autobiography Moab Is My Washpot that he's been a fan of Sherlock Holmes since he was a small boy. This promotion was taken to its logical conclusion when, in 2017, he was commissioned by Audible to narrate

He stars in American TV sitcom The Great Indoors, playing a retired explorer and adventurer trying to get to grips with the fact the magazine he founded is about to die as a print edition, but lives on as a website.

that Douglas Adams once told him in confidence "exactly why 42." Apparently, "The answer is fascinating, extraordinary and, when you think hard about it, completely obvious." However, he has vowed to take the secret with him to the grave.

A self-confessed techie, averaging about a dozen Tweets per day

, he is also a vocal supporter of Free Software

while still being a diehard Apple fanboy, famously purchasing the third Mac sold in the UK after Douglas Adams bought the first two (Adams always insisted it was the other way round but appears to have lost the argument by dint of dying first). He's also been known to use an Android phone as well, and is generally quite adept at social media.

He has his own theme song

, courtesy of the good people known as Weebl & co.

They Say of the Acropolis...

...Where the Parthenon Is.

Stephen Fry trips up on his own words, and panelists Bill Bailey, Alan Davies, Jimmy Carr, and Rob Brydon mock him by turning the repeated phrase into a brief crowd song. With the studio audience clapping along, too!

They Say of the Acropolis...

...Where the Parthenon Is.

Stephen Fry trips up on his own words, and panelists Bill Bailey, Alan Davies, Jimmy Carr, and Rob Brydon mock him by turning the repeated phrase into a brief crowd song. With the studio audience clapping along, too!