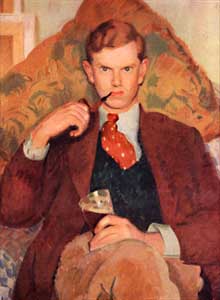 [Waugh's] style has the desperate jauntiness of an orchestra fiddling away for dear life on a sinking ship.
— Edmund Wilson
Advertisement:

Arthur Evelyn St. John Waugh (28 October 1903 – 10 April 1966) was an English writer, known for his dark satires, which include Decline and Fall, Vile Bodies, Scoop, A Handful of Dust, and The Loved One. His single best-known novel is probably the relatively serious Brideshead Revisited. Another serious work was the Sword of Honour trilogy, set during World War II.

Several of his novels have been filmed. Brideshead Revisited was made into a well-known TV miniseries in the 1980s.

Works by Evelyn Waugh with their own trope pages include:

Other works by Evelyn Waugh provide examples of: