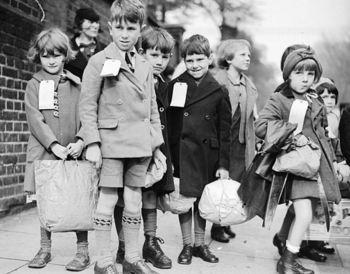 During the Second World War, the British government made a sustained effort to remove civilians, especially children, from areas of the country that were likely to be bombed by Nazi Germany. The result was that large numbers of children (over a million at some points during the war; at least one writer claims that more than 3.5 million people were evacuated in total) were sent from urban areas into the countryside or to Canada, to live with distant relatives or complete strangers.

Fictionally, a standard way to achieve Parental Abandonment (especially in British works) is to use some of these evacuees as protagonists. This is a gold mine for writers; some standard plots that can result are:

One that almost never crops up in fiction is the evacuee who returns home to find that their parents have been killed in air raids or have just upped and left. 40,000 children went unclaimed at the end of the war. Also rarely mentioned are the children who, having reached adulthood overseas, never returned themselves.

The limitation of the plot device is that you're tied to a WWII-era setting, although similar stories can be written about refugees from later wars and political skirmishes in Europe, Asia, and Africa, especially children sent without parents. A variation occurs when the evacuees are sent out of the country, allowing for a Fish out of Water story when they arrive (or return). In fictional depictions they'll often be shown going to America or Australia, but in Real Life most overseas evacuees were sent to Canada (America not being in the war yet and taking pains to appear neutral, and Australia being too far away and in danger itself,... yet.)

Evacuees, at least at the early stages, will be seen with labels around their necks. These were to allow for identification if the trains were bombed. At the time, everyone was told it was to stop them getting lost.

Although the common wisdom is that the government "overestimated" the potential number of casualties, later research suggested that the mass evacuations saved enough lives to make the original estimates seem inaccurate. However there remains debate over whether the dislocation and emotional suffering was really necessary.

For Real Life stories of the evacuees, see No Time to Wave Goodbye and The Day They Took the Children by Canadian author Ben Wicks, an evacuee himself.