Literature / A Tale of Time City 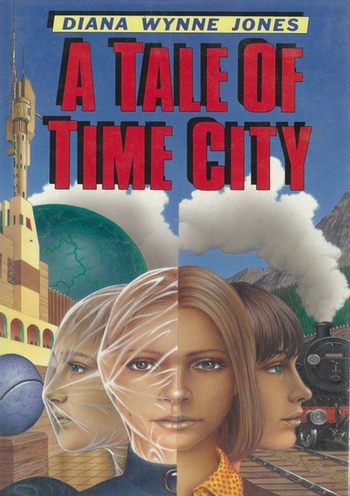 It's 1939 in London, and Vivian is being sent out of her home city to escape the bombings. But while she's looking for her Cousin Marty on the train platform, two boys swoop down, abduct her, and ferret her off to their homeland—Time City, a Place Beyond Time from which scholars observe the whole of human history, from the earliest days of mankind to the Depopulation of Earth in Hundred and Seventeen Century. Due to her name—Vivian Smith—they think she's really Faber Vivian, one of the city's founders. And, in fact, one of the people they think is slowly destroying their city! The boys, Jonathan and Sam, quickly realize the error of their ways. One problem—Vivian is from an Unstable Era, and no one is allowed to come out of an Unstable Era, lest the whole of human history be altered!

Now they must pass Vivian off as their cousin, and she must adjust to Time City life. But the city is still falling apart! Will she, Sam, and Jonathan be able to figure out what's causing the city's destruction before it's too late?