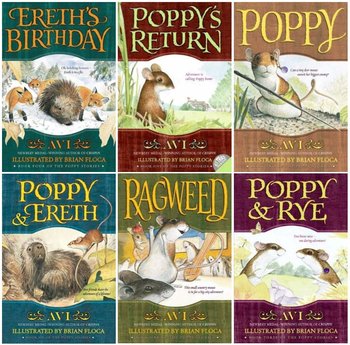 Tales From Dimwood Forest, also known as The Poppy Stories, are a series of books aimed at young adults by prolific author Avi, centering around the inhabitants of the titular forest.

The first title published was Poppy, telling of the titular deer mouse and her family's troubles with the owl Mr. Ocax. After Ocax kills her fiance Ragweed, Poppy embarks on a quest to keep her family safe, befriending a porcupine named Ereth and freeing the forest of Mr. Ocax's extortionary reign in the process.

From there, the series deals with the consequences of Ragweed's death for Poppy and his family, while beavers are destroying their home. Poppy gains a love interest in Ragweed's brother Rye. Later books include a prequel about Ragweed and A Day in the Limelight for Ereth.