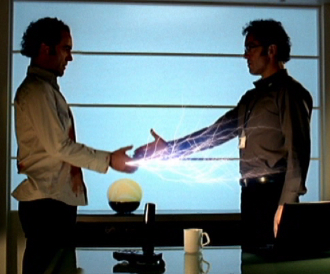 "I know we've clashed a lot, Hyde, but I'm willing to be cool if you are."
"For years, I'd been treating the Hulk like he's some kind of disease, something to get rid of. But then I started looking at him as the cure. Eighteen months in a gamma lab. I put the brains and the brawn together. And now look at me. Best of both worlds."
— Bruce Banner, Avengers: Endgame
Advertisement:

So Bob is also Charlie, maybe even with a little Albert hiding in there somewhere. There are many possible reasons for the existence of these split personalities, but this co-habitation is rarely peaceful or long lasting, inevitably resulting in a Battle in the Center of the Mind to try and find out which personality will take over. Sometimes though, the winner might not reduce the loser to a tiny, powerless voice or destroy it completely, and instead offers to become one again. With a little Epiphany Therapy, Applied Phlebotinum or even actual psychotherapy, they merge into a single, whole person that is greater than the sum of its minds.

The resulting merged personality is usually a composite of the parts that is well and truly psychologically stable. This is especially true if they were an id, ego, and super ego. If they were moral or temperamental opposites, the resulting merged personality will keep traits of both. In more action-driven works, this merger includes combat ability and powers, so if the character had a moron and a badass coexisting, the united whole will be a badass all the time... while occasionally tripping on banana peels. Similarly, if the reason for the personality split was to seal awesome cosmic powers away (resulting in a Superpowered Evil Side; see both Enemy Within and Enemy Without) the united self will have full control over these powers without risk of Super-Power Meltdown or corruption.

Minus the superpowers, this is the Real Life scenario that until very recently was believed to be the best solution by doctors working with multiples clear back to Dr. Morton Prince in the early 1900s

; many books on multiple personality disorder follow this storyline of helping patients integrate their numerous identities to achieve mental health. The many books on MPD/DID written by professional psychologists and published in the '80s and '90s note not official, psychiatric case studies but popular accounts, novels really, which purported to be based on (sometimes very loosely) these doctors' work with abuse survivors who might have been multiple. tend to end with Integration as a Happy Ending, either Disneyesque note As multiples began speaking up for themselves in the late '80s-early '90s, rather than letting mental health professionals have full control of the narrative, some observed that many doctors, and numerous books on the subject, seemed to equate "integrated" with "June Cleaver." or a spiritual experience akin to a conversion. Actual multiples report YMMV on this experience; while merging has indeed been helpful for some,note Chris Costner-Sizemore, the real The Three Faces of Eve integrated permanently and really did feel it was the answer others who have gone through it have deliberately de-integrated themselves later on, feeling that the whole is less than the sum of the parts.note Sybil and Billy Milligan, arguably the two most famous cases of the 1970s, both ended up de-integrating and felt much better for it. Still others can integrate and separate at will, but report it as an unpleasant experience. When Rabbit Howls is a notable autobiography covering that side of the subject, written by members of a multiple collective who spoke out vehemently against this idea as a form of murder. To multiples who feel this way, it's better to learn how to communicate and work together as a Split-Personality Team or Mind Hive. Psychology professionals have come to accept this viewpoint in recent years as well, believing that having these people learn to safely coexist is just valid as attempting to merge them.