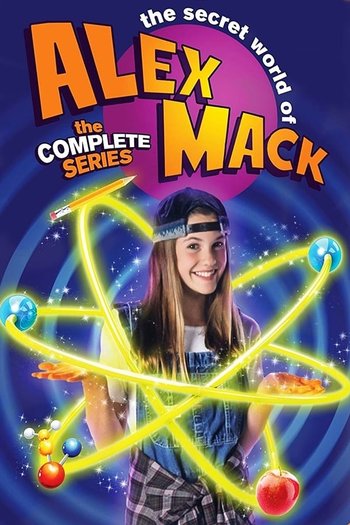 "I'm Alex Mack. I was just an average kid until a freak accident changed my life. And from then on, nothing's been the same.
My best friend Ray thinks it's cool. My sister Annie thinks I'm a science project. And I can't let anyone else know. Not even my parents.
I know the lab wants to find me and turn me into some experiment. But you know what? I guess I'm not so average anymore."
—Alex Mack's opening exposition
Advertisement:

The Secret World of Alex Mack is a Nickelodeon television series created by Thomas W. Lynch and Ken Lipman. It tells the story of Alex Mack (Larisa Oleynik), a young girl who lives with her parents and older sister in a planned community owned by a chemical plant, where her parents work. She has a bad first day at her new school, and to make matters worse, a truck from the plant crashes and drenches her in a top-secret chemical called GC-161.

The chemical gives her an... interesting variety of superhuman powers: telekinesis, the ability to zap electricity from her fingers, the ability to melt a la the T-1000, and glow when she senses danger or gets upset. Her best friend Ray Alvarado (Darris Love) and her older sister Annie (Meredith Bishop) learn soon after and try to keep it a secret from anyone else, including the show's other two regulars, Alex and Annie's parents, George (Michael Blakely) and Barbara (Dorian Lopinto). Unfortunately, Danielle Atron (Louan Gideon)—the head of the chemical plant that created GC-161—wants to see what effect the chemical has on human beings and has decided that finding the kid who was drenched and experimenting on him/her is a good way to go about this. She enlists the help of Vince Carter (John Marzilli), the head of plant security, to track her down. Vince is partnered up with Dave Watt (John Nielsen), the driver responsible for the accident, who may or may not (more likely the latter) be able to recognize the child.

The show ran for four seasons on Nickelodeon from 1994 to 1998. A series of chapter books for kids was also released alongside the show.