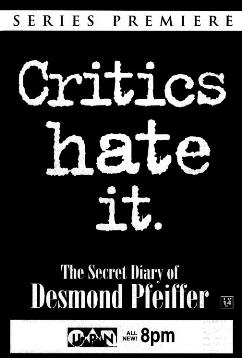 The infamous ad.
"The Civil War defined America.
Both the good and the bad.
It was the crossroads of our being,
and it was a hell of a crossroads."
— Shelby Foote
"Who would have thought there was a comedy in all that?
Well, we did.
We were fortunate to acquire an extraordinary historical document. The Secret Diary of Desmond Pfeiffer — the "P" isn't silent — chronicles the life and times of a member of President Lincoln's staff at the height of the Civil War.
Pfeiffer, an English nobleman, claimed that he and his trusted man-servant were forced by rival noblemen to flee to America due to a dispute over the queen...all 5 of them.
The rest, as they say, is history.
Everything that follows actually happened...you can't prove that it didn't."
— The opening preamble to the series
Advertisement:

The Secret Diary of Desmond Pfeiffer was a very short-lived and controversial sitcom on UPN that only aired four episodes, all of which were in October 1998. Starred Chi McBride as the titular character, a Servile Snarker Black English nobleman and butler who is kidnapped and sent to America on a slave ship, then becomes a valet in Abraham Lincoln's White House. He finds himself being the Only Sane Man in Lincoln's staff, which is full of morons. Think Benson set in the Civil War era.

The series is extremely rare, never having been released on home video or in reruns, due to its extremely controversial nature. The NAACP led a protest against the show, citing its arguably light-hearted portrayal of the enslavement of African-Americans, and forced the pilot episode to be pulled. The now-defunct cable network Trio was set to rerun the show during the Turn of the Millennium as part of its "Flops" block (which also reran Cop Rock, Pink Lady and Jeff and My Mother the Car), but backed out due to the show's Unfortunate Implications. Appropriately enough, for a show that was both critically panned and low rated (the reason it was cancelled), it was proudly advertised with the tagline "Critics hate it."