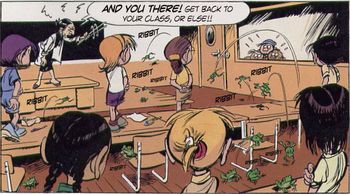 "You see? Frogs are cooler on the outside than they are on the inside! So please, don't dissect them!"
— Lana Loud, The Loud House, "Frog Wild"
Advertisement:

In many shows set in a High School, there is an episode where everyone must dissect an animal (usually frogs) in science class.

A character (usually an Animal Lover) will question whether it is morally acceptable to kill the creatures For Science!. The teacher will usually inform the objecting character that not doing the dissection will result in a failing grade. There are two standard directions the show can go at this point:

A variation of the trope is the student trying to save the class pet, in which the animal was never in danger of dissection and the objecting student feels it's wrong to keep it in captivity at all (or possibly because they mistakenly believe it is in danger).

For a number of reasons, the dissection variation is mostly a Discredited Trope.

The character may go on to join an Animal Wrongs Group. See also Escaped Animal Rampage.

Nancy Green, the mother of Cricket and Tilly and ex-wife of Bill, attempts to free some cows from a dairy factory, but ends up getting arrested for it.

Nancy Green, the mother of Cricket and Tilly and ex-wife of Bill, attempts to free some cows from a dairy factory, but ends up getting arrested for it.