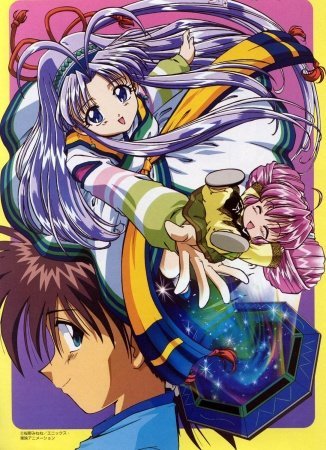 "Like the moon in the night sky, I stay by my master's side."
Advertisement:

A Manga by Minene Sakurano about Tasuke Shichiri, concerning a 14-year-old boy who receives a gift from his father, Tarousuke, who is traveling in China. The gift is a ring, the Shitenrin, and those pure of heart may gaze into it and receive a moon spirit called Shaorin. Her purpose is to protect her master. Later the spirit Ruuan comes to him from a flute-like object when he gazes into it. Her job is to make her master happy. Hilarity Ensues as Tasuke tries to adjust to life with his new housemates and attempts to work up the nerve to tell Shao that he's fallen for her.

The principal cast is composed of the following characters:

The series was adapted into a 22-episode TV Anime series, which proved popular enough to spawn an eight-episode OVA sequel, Denshin Mamotte Shugogetten, which covers some manga material left untouched by the TV series (most notably, the addition of the third spirit, Kiryuu, to the cast). While the anime remains unlicensed, the manga was picked up by Raijin Comics (and printed as Guardian Angel Getten), which folded due to financial troubles while only on the fourth volume; Tokyopop picked up the license and started the translation over from the beginning.