Western Animation / What About Mimi? 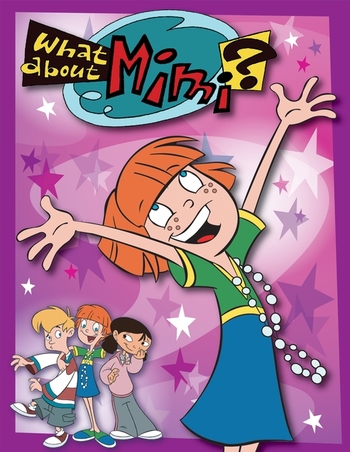 What About Mimi? is an award-winning Canadian Slice of Life Animated Series created by Chris Bartleman and Blair Peters and produced by Toronto's Decode Entertainment and Vancouver's Studio B Productions (both now part of WildBrain).

The show focuses on the everyday life of Mimi Mortin, a redheaded 11-year-old girl with a highly active imagination, a knack for creative problem-solving, and a bright outlook on life. Mimi lives in the town of Starfish Bay, where she attends school, hangs out with her friends Elaine and Russell, and deals with a variety of everyday kid problems like bullies, rivals (including her former friend and Alpha Bitch Sincerity Travers), parents, and teachers. Mimi, being who she is, can almost always come up with imaginative solutions to any challenges at hand, but even then the best-laid plans of 6th graders can still go astray. Fortunately, Mimi always has her friends, family, and plenty of other people in her life and behind her back to ensure she can always find a way to make sure things turn out okay.

The show debuted on Teletoon on October 4, 2000 and ran until August 14, 2002, ending with a grand total of 39 episodes over 3 seasons. While the first two seasons were full half-hour episodes, the third season changed the format to Two Shorts.

What About Mimi? contains examples of: