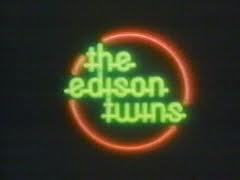 Yes, every day is a different trial, and they pull through with a lot of style
Always getting out of trouble that they get in, life with the Edison Twins!
— Lyrics from the theme song to the show

The Edison Twins is a Canadian series produced by Nelvana, arguably their most successful live-action production.

This series features the adventures of Tom and Annie Edison (played by Andrew Sabiston and Marnie McPhail respectively), a pair of teenage scientific prodigy siblings who face a variety of challenges which they overcome with their expertise of science. Along the way, their younger brother, Paul, hangs around them and gets into a vast variety of trouble that his older siblings have to get him out of.

The Edison Twins has the following tropes exhibited: