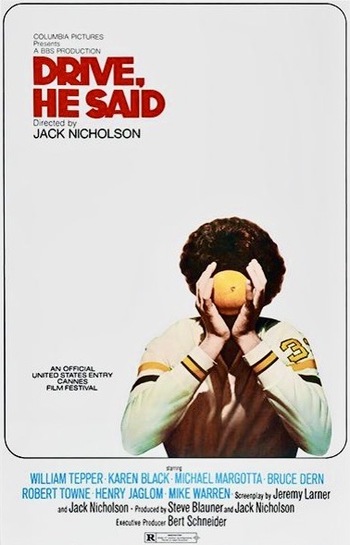 Drive, He Said is a 1971 film written by Jeremy Larner and Jack Nicholson, based on a 1964 novel by Larner and directed by Nicholson in his directorial debut.

Hector Bloom (William Tepper) is a college basketball player struggling with disenchantment. He keeps showing up late to practice and playing below his abilities, despite the efforts of Coach Bullion (Bruce Dern) to encourage him. He is also dealing with his roommate Gabriel (Michael Margotta), a barely-sane drug addict obsessed with the counterculture, and having an affair with Olive (Karen Black), the wife of his professor Richard (Robert Towne).

Drive, He Said contains examples of: