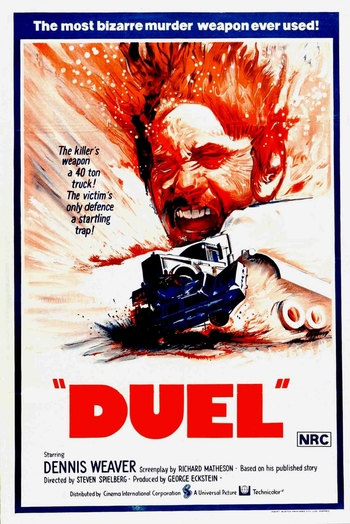 Fear is the driving force.
"A duel is about to begin between a man, a truck, and an open road. Where a simple battle of wits is now a matter of life and death."
Advertisement:

Milquetoast businessman David Mann (Dennis Weaver) is driving across the California desert in his red Plymouth Valiant when he passes a slow-moving semi-truck. Much to his surprise, the truck proceeds to pass him and slow down again. This repeats a number of times, and finally David pulls over into a gas station to get away from the redneck nut.

Except that the truck stops with him. As the movie progresses, the truck and its unseen driver continues to stalk David, getting more and more aggressive in its attacks, until David has no choice but to fight back.

The first full-length feature directed by Spielberg, this Made-for-TV Movie was adapted from a short story by Richard Matheson (who also wrote the script). Shot in just two weeks, it turned out so well it was given a theatrical release in Europe featuring added scenes filmed after its first airing on television.