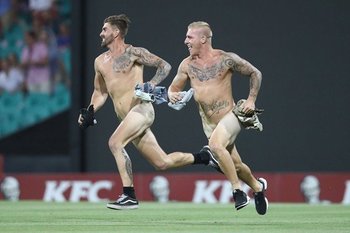 The winner of this week's 'Spot the Ball' competition is...absolutely everyone.
Advertisement:

Streaking is, as defined by Oxford Dictionaries, as "informal run naked in a public place so as to shock or amuse others." This trope has made an appearance in many forms of media since its popularity boom in the early 1970s and has continued to be an ongoing, though uncommon, phenomenon in modern society. Streaking can be separated into two types: