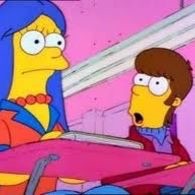 Why Do Birds Suddenly Appear?...
Advertisement:

After the Simpson TV set breaks down, Marge and Homer decide to tell the kids the story of how they met in high school and eventually started dating.