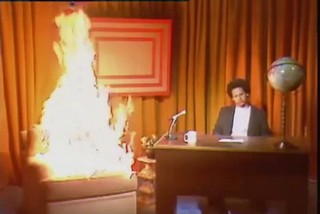 Ladies and gentlemen, it's The Eric Andre Show!note  And yes, he is attempting to interview the fire.
"AAAAAAAAAAAAHHHH!" *CRASH*
— Eric Andre rampaging on his own set at the start of each episode
Advertisement:

The Eric Andre Show is a "talk show" that airs on Adult Swim, created, written and hosted by actor, comedian, and all-around crazy person Eric Andre, with fellow comedian Hannibal Buress as co-host. We use the term "talk show" loosely since it barely begins to capture the essence of what this show truly is — imagine a live-action Space Ghost Coast to Coast, but a hundred times crazier.note Andre has even noted Space Ghost as one of his influences for coming up with the idea for his show.

The crux of the show is in its interviews of celebrity guests (who are totally unaware of what they're supposed to expect 90% of the time), engineered to be as bizarre as possible. During the interviews, Eric will almost always go off on unrelated tangents, just not pay attention at all while random and absurd things happen, spring crass and explicit jokes on the fly to gross out his captive audience, or just go berserk without warning and attack whatever thing in the room makes him the angriest at the moment, be it furniture, equipment, or person.

Adding to the surrealism is the dynamic between Eric and Hannibal — the latter of whom manages to be a Cloudcuckoolander and a Straight Man at the same time — and recurring elements including sketches, candid camera street pranks and monologues courtesy of Eric, and the show's set. The set is specifically designed to keep the guests not exactly relaxed, in ways such as putting a heater in the guest's seat beforehand or spraying water all over the guest. Eric also has a habit of wrecking the set at the start of every episode (after which it gets magically fixed by stagehands).

Life is stupid, do whatever
You could die or live forever
What to do now, we just don't fuckin' know!
'Cause that's all we... had planed for...
The show!