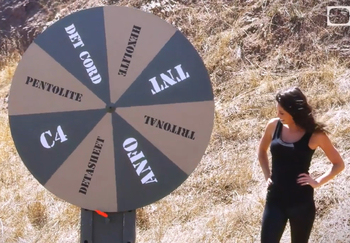 When a decision needs to be made, or the recipient of a prize must be selected — and no option is more desirable than the others — there are many games that can be used to fairly select an option at random. When Drawing Straws or flipping a coin isn't exciting (or funny) enough, characters resort to the Wheel of Decisions.

A colorful carnival wheel with images of all the different options illustrated on each space. Whichever option the pointer lands on when it stops will be picked. On game shows, there will usually be a Lose A Turn (or other penalty) space that participants hope to avoid.

Usually, an indecisive character will try to use the wheel when they are expected to make an informed decision where a random choice would be completely inappropriate. Expect them to rig the wheel in some way, like having one option way larger than the others. Dense characters may add a "Lose A Turn" even when the wheel is not used as part of a game, leading to the question of why they would design the wheel in a way so as to penalize themselves.