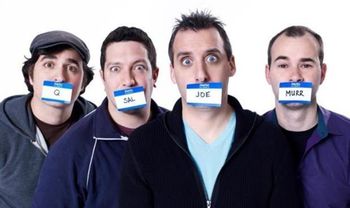 Impractical Jokers is a hidden-camera series from TruTV, featuring the Tenderloins Comedy Troupe, which is comprised of four longtime friends (Brian "Q" Quinn, James "Murr" Murray, Salvatore "Sal" Vulcano, and Joseph "Joe" Gatto) who challenge each other to act outrageously in public. If you refuse, you lose. The show is presented as a sort of reality competition, where whoever fails the most challenges in an episode is forced to undergo a non-negotiable punishment of greater humiliation than normal.

On December 31, 2021, Joe announced his departure from the show after nine seasons, citing personal issues. Q, Murr and Sal have agreed to produce Season 10 without him.