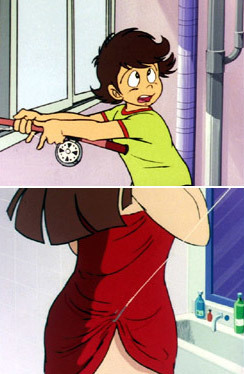 The classic rod-and-reel combo has been the design of fishing rods for hundreds of years now. The even simpler design of a string hanging from a simple wooden stick even older. But what if you're not fishing exactly? This trope repurposes fishing poles to hook other objects.

If you've dropped your keys down a hole, need to pull something from far away, or you're missing a weapon, the fishing rod can do it all.

Compare Dangerous Backswing. Contrast Fishing for Sole, where the character intended to catch a fish, but caught something else instead. The hook may turn into a Stripping Snag.