Every Proper Lady Should Curtsy 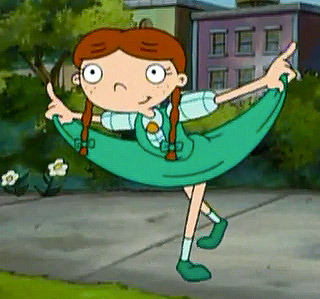 Just be careful not to get it too high, or a Panty Shot would be imminent.
Advertisement:

A typical greeting done by a woman/girl, it has long been considered to be a gesture of respect, though it is less common nowadays. For all variants of the curtsy, she bends her knees, sometimes sweeping one foot behind the other, and holding her skirt in both hands.

Furthermore, most servants would be expected to curtsy to their masters/mistresses, and all women would do so to someone of a higher social standing, like royalty. (Inverting this can cross over with Kneel Before Frodo.) Female dancers may also curtsy at the end of a performance, or before engaging in a dance with another person. Note that for some, like The Ditz or the Cute Clumsy Girl, this may be a difficult thing to do. They may be used to contrast a Proper Lady who will, naturally, be an expert.

Can also be done in a mocking manner, as a sign of disrespect.

It's also a common part of those Regency-Debut to London Society type books. Specifically, the formal presentation to the queen, where the presentee has to curtsy before the queen. There's a little info about it here,

after the fourth picture.