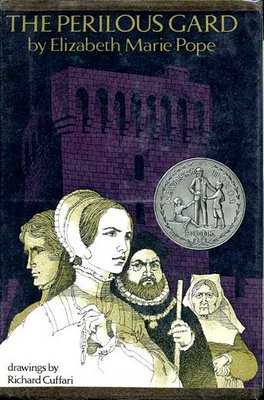 Or "the dangerous castle," if you were wondering
Advertisement:

The Perilous Gard is a young adult novel by Elizabeth Marie Pope (The Sherwood Ring). The book is set in Tudor England and tells a variant on the ballad of Tam Lin. It won the Newbery Honor in 1975.

Summary: Kate and Alicia Sutton are young maids of honor to the Lady Elizabeth Tudor, who is confined to her house at Hatfield under the extreme displeasure of her sister, Queen Mary.

Alicia, a beautiful ditz, writes the Queen to complain about the conditions at Hatfield. Her Majesty takes offense but elects to punish not Alicia (who she's sure isn't responsible), but instead her older, plainer sister, Kate. Kate is sent to live under house arrest at Elvenwood Hall in the care of Sir Geoffrey Heron.

She soon discovers she has walked into a somewhat fraught family situation: Sir Geoffrey's small daughter and only child, Cecily, disappeared under mysterious circumstances while in the care of her uncle, Christopher Heron, who of course is now Sir Geoffrey's heir. Everybody draws the obvious conclusion, and Christopher's Byronic posturing does nothing to help the situation.

This is followed by the revelation that the 'Elvenwood' really is the haunt of honest-to-God 'Fairy Folk' (or surviving pagans) who pay a teind to Hell (or their gods) of one human life.

Guess why Cecily was taken. Guess what fate is intended for Christopher, who has offered himself in exchange for his niece. Guess who has to save him.

The Perilous Gard contains examples of: