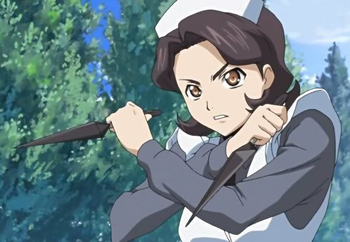 Don't mess with the Sayocopter.
"A maid who works and lives in the Scarlet Devil Mansion. She does a maid's duty perfectly: cooking, cleaning, washing, babysitting, knife throwing, etc."
— Sakuya Izayoi's Profile from Immaterial and Missing Power
Advertisement:

A maid (French Maid Outfit often included) who knows kung fu. Many ninja maids intentionally cater to the contrast between the image of a helpless, gentle, obedient Meido and an Action Girl in a frilly uniform jumping off the mansion roof and landing her Mary Jane heels squarely in someone's face.

May or may not develop a Bodyguard Crush on her master, be they male or female. If said master is very young or sickly, she might tend to be their Mama Bear as well.

This trope has some basis in history, as ninja are traditionally known to infiltrate locations by posing as servants.

Common in anime and manga.

Compare Battle Butler, who fulfills the same basic role of "domestic servant with combat skills" but is typically dressed in a suit even if female. Can be related to Super-Powered Robot Meter Maids and McNinja. A Sister Trope to Gratuitous Ninja.