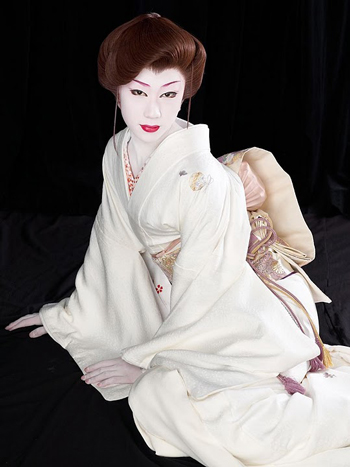 The kimono, of course, does that thing that all kimonos generally do.
"Oh shit" I hear myself say.
And I would have thought, at my age, no single part of a woman could ever again be this simply breath-taking to behold.
— Eveless Eden
Advertisement:

In Japan, kimono hold a very special place in people's hearts, and are a medium of a thousand symbols. For more information about kimono, see the useful notes. For its use as a visual cue for tradition, see Kimono Is Traditional.

Kimono can also be a specific type of fetish, in ways not easily explained to the uninitiated. Firstly, people are expected not to wear western-style lingerie underneath, as a bra would ruin the bustline (which should be smooth), and pantylines are a definite no-no. Secondly, the whole body being wrapped in one lovely package typically spells out (in the case of a girl) "innocent", "proper", "charming" and "eligible" in kimono code. Few people in Japan know enough about kimono to detect every nuance, but the message seems to trigger some subconscious level of understanding. The idea of getting to open up such a prettily-wrapped present thrills many a mind, similar to corsets. There's also the fact that, no matter how much of the body is covered, the Ultimate and Most Bewitchingly Sensual Mystery of the Female Body (i.e. the nape of the neck) is revealed for all to see. Add to that the long shape and restriction of the garment forcing one to adopt a lady-like elegance (or, for guys, a tall and dignified posture) and, well... what's not to like?

Yukata are worn by nearly everyone in Japan come summertime and festivals. The feelings they awaken are rather similar to kimono. By nature, a yukata is relaxed home-wear (comparable to shorts and a tank top), and situations where one can wear it are very limited. A big part of the allure of summer festival or hot springs (filler) episodes in anime and manga is related to having the cast wear yukata. Because there's nothing underneath. On young children, the special fluffy yukata obi presents an excellent opportunity for extra big bows and super-cutesyfication.

Kimono Fanservice comes in two types, which can and do overlap (please note that straight fanservice, where the garment simply happens to be a kimono, but could just as well be a bathrobe or a shirt or whatever, is simply fanservice).

Where the audience appreciates the garments themselves. Especially prevalent in period pieces. Can overlap with Awesome Anachronistic Apparel.

B: Pandering to the Base, Fetish (with/or mild Fanservice)

Where the audience appreciates getting to see their favourite character in this specific dress. Unlike conventional fanservice, the amount of skin shown will be minimal. Caters to such fanservice tropes as (supposed) Going Commando, (hypothetical chance of) mixed Action Dress Rip and Show Some Leg, and maybe Sarashi. Especially in the case of geisha, a specific sexual plus is that the dress frames the nape of neck, which was the Japanese fixation before Western fashions became dominant.

Another variant of kimono fanservice comes up with some more seductive characters, who wear theirs off-the-shoulder in a way that looks like they are on the cusp of a Wardrobe Malfunction, exposing their shoulders and, in some cases, showing off substantial cleavage.

Due to its complexity and obscurity to modern, and foreign, folk, it's also constantly subjected to research failure-induced Unfortunate Implications (right flap over left means you are dead and soon to be cremated) and Accidental Innuendo (in modern era costumes, obi tied in front signify a working girl). Kimono wearing in itself has suffered from Trope Decay; a single man can be blamed for today's tubular kimono fashion, its rigid rules, and the death of the more fluid style of pre-WWII times. As per Rule of Cool, many of those rules get kicked out the door in fiction, and heroines won't get accused of "abusing a national symbol" by a mob of angry aunties.

See Qipao for another type of "sexy Asian dress" used frequently in fiction.

Please do not add examples of typical fanservice that just happen to contain a kimono (the kimono falling off or open, kimono used in the same way as a normal robe, etc) to this page. They should go on the Fanservice page.